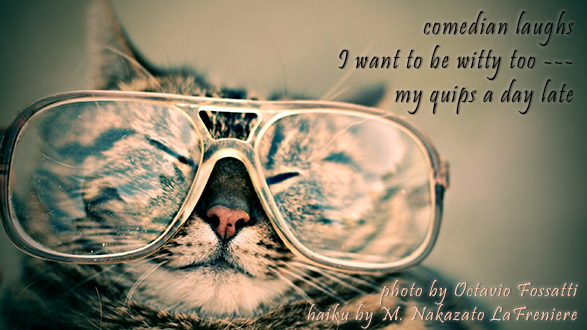 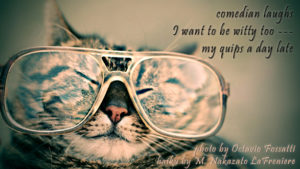 I’m one of the George Burns of the world.  Serious, but finding the world funny. Deadpans, while the Gracie’s of the world fling back quick-witted comments.  My sister is a bit of a Gracie — she’s good at saying something funny right at the time.  Winter, too, he’s hilarious. My quick quips show up — too bad they’re a day late.  All the things I could have said … yesterday!  Laughing.  It’s ok.  We can’t all be funny.  I’m like the designated driver.  I get to laugh.  So I get the best job of all.

is on my list for next year.  I want to watch the DVD as well as read Wit: A Play

but need a little more distance. Emma Thompson, as a professor in 17th century literature (think John Donne), battles cancer treatment (yeah, sometimes the treatment can be rough) with wit and increasing grace. Margaret Edsen, the playwright, worked as a unit clerk in a cancer ward. She quit, took a less stressful job at a bike shop to write her play before going for her master’s.
She sent the play to 60 theater companies before it was accepted.  A college drama friend, Derek Anson Jones, carried it in his backpack for years. He found an opportunity to direct it at the Long Wharf Theater in Connecticut starring Kathleen Chalfant. Positive reviews carried the play to Off-Broadway, a national tour and HBO.
And Margaret Edsen?  In the time it took the play to become famous, she became a kindergarten teacher.  After getting her master’s she was accepted into the second year of DC’s alternative certification program. The program helped put teachers into inner-city schools who last longer than the typical 21-year-old teacher straight out of college. She loves and values teaching and even becoming a big hit in the drama world doesn’t entice her away. She said in a Washington Post interview, “I feel very clear about what I’m doing. I’m perfectly sure of the positive impact of what I’m doing. ” She is one of my heroines.

Last month I got my first “buy” as an Amazon affilate, receiving $3. Haven’t gotten a second one yet. Still I’m happy. The first buy means they’ll review your site and officially accept you and I got accepted! Now, I’ll usually get a percentage if someone buys something by clicking a link — for books it’s 4.5%. Amazon disclosure: “We are a participant in the Amazon Services LLC Associates Program, an affiliate advertising program designed to provide a means for us to earn fees by linking to Amazon.com and affiliated sites.”
Post Views: 3,039