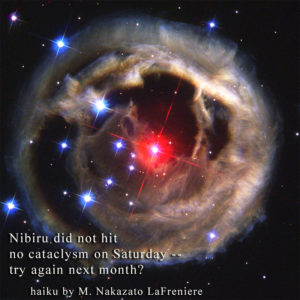 Nibiru did not hit
no cataclysm on Saturday —
try again next month?

I missed the end of the world!  Planet Nibiru crashed into Earth on Saturday, September 23, 2017!

Well, that was the prophecy.   David Meade wrote a book Planet X — The 2017 Arrival forecasting Nibiru would hit Earth two days ago based on the Biblical book of revelations, geopolitics, numerology, and, um, er, other “facts.”  Christianity Today complained that “Meade is a made-up leader in a made-up field, and should not be on the front page of anything, let alone Fox News.” They’re unhappy he is making Christians look bad by another end-of-the-world prophecy.

NASA stated there is no such planet Nibiru and if there were, the many astronomers staring into space everyday would have spotted it hurtling towards Earth.  NASA updated a previous page on Nibiru because apparently people thought Nibiru would smash into us back in 2012. The rumor gained so much traction that NASA made a page refuting it.

Aliens report world will end in 2003

Wikipedia states the Nibiru prophecy started even before 2012.  Nancy Lieder claimed gray-skinned aliens Zetas contacted her in 1995. She said Planet X would swing by Earth on May 27, 2003 stopping the earth’s rotation for 6 days, triggering a pole shift and the end of the world.

When nothing happened in 2003, believers in Planet X switched the target date to 2012.  The rumors got so much traction that NASA put up a page refuting it. Another writer wrote about a planet zipping past the earth.

Zecharia Sitchin, in his book The 12th Planet interpreted Babylonian texts to say a giant populated planet named Nibiru aka Marduk passes by the earth every 3,600 years. He wrote the folks on this cruising planet hopped over to earth and became Sumerian gods with their advance tech and abilities. In 1996, Leider said her Planet X and Nibiru from the Sitchin book were the same. Sitchen wrote Nibiru was due for a comeback.

(Not so quick aside: hmmm, interpretation can be tricky.  In Japan, I thought someone said “bakemon” which means ghost but what they said was “bakachon” which is an instant camera so easy a dummy could use it. I wondered why they were talking about ghosts when they were complaining about someone taking their picture — kind of a big difference, dontcha think? I only knew a few words in Japanese so cobbled together meaning incorrectly.  Got a few things wrong — lotsa times. 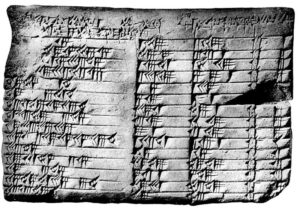 So gotta say, it has to be worse interpreting Babylonian. What if some Babylonian was complaining about their brother-in-law Nibiru who keeps coming back for a hand out …. every 36 hours instead of a returning planet.  To be fair, I’ve never read Sitchin’s book and I don’t know his background — yet even I know translations are tricky and nuances get lost often. Can you imagine translating crumbling ancient texts in time-worn fragments? Anyone could have read in a Babylonia script that there were alien astronauts tromping around Sumeria, I’m sure.  [I’m joking, geez] Besides, what if they had science fiction writers way back then?  Wouldn’t that be awesome? [Now, I’m not joking.  It would be awesome!])

Back to the story: the world will end …. wait for it …

And what does Meade have to say with Saturday a memory and the bulk of us trudging off to work as always?  Oops, not the end of the world after all.  “The world is not ending, but the world as we know it is ending,” he said in a Washington Post story. Instead the next seven years will be cataclysmic with lots of shit happening and then we’ll have the end of the world ….. again.

No, the World Won’t End Next Week and There’s No Such Thing as a Christian Numerologist, by Ed Stetzer, Christianity Today, 9/16/2017

The world as we know it is about to end — again — if you believe this biblical doomsday claim, by Kristine Phillips, The Washington Post, 9/17/2017

The 12th Planet (Book I): The First Book of the Earth Chronicles by Zecharia Sitchin, 1976

Image of Planet
By NASA, ESA and H.E. Bond (STScI) [Public domain], via Wikimedia Commons
Light echo around V838 Monocerotis
“In January 2002, a dull star in an obscure constellation suddenly became 600,000 times more luminous than our Sun, temporarily making it the brightest star in our Milky Way galaxy. The mysterious star, called V838 Monocerotis, has long since faded back to obscurity. But observations by NASA’s Hubble Space Telescope of a phenomenon called a “light echo” around the star have uncovered remarkable new features. These details promise to provide astronomers with a CAT-scan-like probe of the three-dimensional structure of shells of dust surrounding an aging star.” (by wikipedia on the image page)
Source for the wikipedia commons image:
Hubble Watches Light from Mysterious Erupting Star Reverberate Through Space, March 26. 2003, Hubblesite

Books on Amazon : prophecies and The End of the World: Stories of the Apocalypse, a collection of stories by sci-fi and fantasy authors including Neil Gaiman, one of my favorite writer.

I’ve been accepted as an Amazon affiliate. Last month I got my first “buy”. Haven’t gotten a second one yet. Still I’m happy. The first buy means they’ll review your site and officially accept you and I got accepted! Now, I’ll usually get a percentage if someone buys something by clicking a link — for books it’s 4.5%. Amazon disclosure: “We are a participant in the Amazon Services LLC Associates Program, an affiliate advertising program designed to provide a means for us to earn fees by linking to Amazon.com and affiliated sites.”