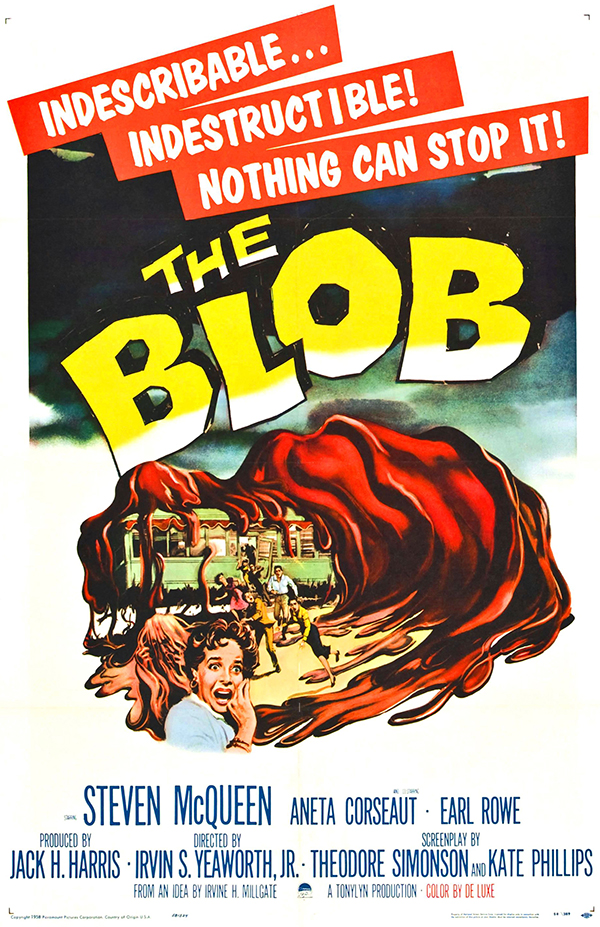 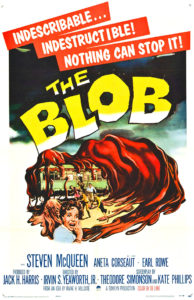 If you are in Phoenixville, PA in around mid-July, checkout their Blobfest.  The festival kicks off with festival goers running screaming out of the restored Colonial Theatre, re-enacting the famous scene.  Sounds hilarious!

Wikipedia said the Blob was inspired by a 1950 Pennsylvania star jelly incident.  Curious, I looked up star jelly on wiki: 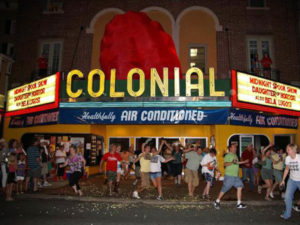 “Star jelly (also called astromyxin, astral jelly) is a gelatinous substance sometimes found on grass or even on branches of trees. According to folklore, it is deposited on the Earth during meteor showers. Star jelly is described as a translucent or grayish-white gelatin that tends to evaporate shortly after having “fallen.” Explanations have ranged from the materials being the remains of frogs, toads, or worms, to the byproducts of cyanobacteria, to the paranormal. Reports of the substance date back to the 14th century and have continued to the present day.

….  In 1950, four Philadelphia, Pennsylvania, policemen reported the discovery of “a domed disk of quivering jelly, 6 feet in diameter, one foot thick at the center and an inch or two near the edge”. When they tried to pick it up, it dissolved into an “odorless, sticky scum”. This incident inspired the 1958 movie The Blob.”

Now the question of the day is, if you saw a big unknown “quivering jelly”, would you try to pick it up?  My answer: Hell no, I’m not crazy!

disclaimer: I signed up as an Amazon associate. I should get a percentage back if anybody buys anything at Amazon through my links. (Amazon doesn’t decide if they accept you until they look at your site after a first purchase. No first purchase yet, so still in the acceptance process. It’s been a month but I think they give you time.) Books are 4.5% but other things vary from 0-10%. I think Amazon requires the following text: “We are a participant in the Amazon Services LLC Associates Program, an affiliate advertising program designed to provide a means for us to earn fees by linking to Amazon.com and affiliated sites.”