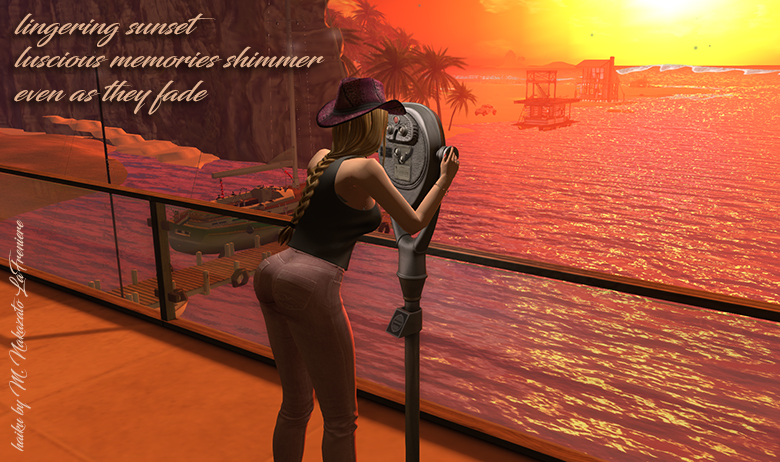 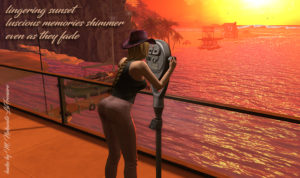 lingering sunset
luscious memories shimmer
even as they fade

Georgia told me about the Daily Post putting out a daily prompt each day.  A single word to kickoff people’s creativity.  I thought I’d give it a shot but as a daily haiku or senryu.  Or I might do a tanka which is 5-7-5-7-7 so five lines.

by Machi Tawara (got it when I taught English in Japan in my 20s).  At age 25, she revitalized the tanka when her poetry captured modern love and life in sharp bites as her emotions pingpong from joy to sorrow.

A Salad Anniversary excerpt by Machi Tawara, translated into English by Juliet Winters Carpenter.  If you look at these, they have no season/nature word and about human nature. Her book, although tanka, was the beginning of my discovering senryu because until then I thought the Japanese poems used nature to indirectly reference human nature.

Our coffee, always “American”,
hearts in love think alike —
or cancel each other out

Not too much later I found a book on senryu. What’s the difference between haiku and senryu?  They are similar as both use the 5-7-5 format.  However haiku was seen as more elegant and formal having to contain a “season/nature” reference and a few other guidelines.  Senryu was the poetry of the “masses” and could be about anything including daily life or even a ghost story. J.C. Brown in Senryu Poems of People said “… that is the appeal of senryu: They express everyday truths, happy or sad, in succinct verse.”

An old anonymous senryu from the 1700s follows.  Political senryu back then was usually anonymous–freedom of expression was not a right back then meaning writing politics could get you decapitated.

This poem is about a bookseller, Fujiokaya Yoshizoo in the 1700s who sold information to samurai visiting Edo from all over Japan. Rie told me his now-invaluable diary, Fujiokaya Nikki, spanned more than 65 years covering politics, natural disasters, publications, theatre and performing events and critics, people’s rumors, troubles, murders and other incidents.  Rie said she could “feel some sarcasm” in the senryu.

Cynical, humorous, bawdy, political or ironic, senryu reveals human nature. Senryu is the anonymous protest poem, the risque ode to one’s love, a cynical caricaturization of a neighbor, the honest piercing of a sorrow.  When the Japanese Americans were shuffled off to the concentration camps — oh, I’m sorry — the relocation centers during WWII, they wrote haiku and senryu to document their experiences.

Itaru Ina wrote poems while incarcerated at Tule Lake Relocation Center.  Itaru joined The Tule Lake Senryu Kai group meeting weekly. Opler wrote about the group, “The formation of a Senryu circle marked no sudden trend toward Japanization. Rather, this element of Japanese culture which lived among the first generation, or Issei, as a part of their cultural heritage, was revived when West Coast communities were uprooted, careers interrupted, and the long, uncomfortable trek inland begun on the shortest notice. Senryu poetry, then, is one aspect of the cultural revivalism which occurred with the first generation age group when they realized that their futures might be uncertain in this nation.”

The group published their writings in Tessaku (Iron Gate). Opler explained in  Senryu Poetry as Folk and Community Expression that while both haiku and senryu used nature saying if a blossom is the topic that’s haiku; but if the blossom is a metaphor for a young girl then that’s senryu. At their meetings, the group would be given a topic and then write a poem with 45 minutes before the next topic is given.  Meantime a chosen critic goes over the written poems to read aloud and critique to the group afterwards.  Too vulgar and the poem was not read aloud — this one was considered too sexy for reading or for their pub:

Later Itaru was sent to Bismarck but continued to write poetry illegally smuggled in the seams and hems of clothing to be mended sent out to his wife still at Tule. He wrote the following poem in Tessaku 8 (1945)

Wild geese fly away —
the tower guards
are on a break

Because the senryu is not about geese but rather the geese are a metaphor for freedom/escape, it’s not a haiku. Like the difference between a classic and pulp novel, while I admire the beauty of haiku with its perfect turn of a phrase, it’s senryu I love.

You can use the search bar to search for something on Amazon as I did with “salad anniversary”.

While I am an Amazon affiliate, this has no effect on your price. The price remains the same. Amazon disclosure: “We are a participant in the Amazon Services LLC Associates Program, an affiliate advertising program designed to provide a means for us to earn fees by linking to Amazon.com and affiliated sites.”

Senryu Poems of People: Poems of the People

Rie said I should start adding color so I added the photo taken in Second Life by avatar Kayla Woodrunner.