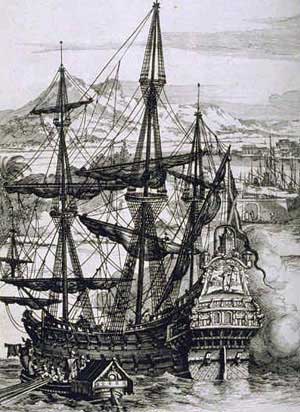 Superstition mountains, the lost Dutchman’s gold mine is out there somewhere.  People still look for it.

Other tales of lost gold have proven more worthy.  Back in 1715 Spain needed money badly so they demanded their colonies pony up some goods.  Eleven galleons set sail from Cuba laden with gold, silver, emeralds and pearls.  They set sail just as hurricane season started. By the end of the week, the fleet had sunk off the coast of Florida.  Four ships have still not been located although some suspect one ship survived.

Fast forward to September 2013.  A diver off the coast spotted a gold coin and told his friend.  The Schmitt family (father,daughter, and son) went diving, searching to see if they could find any more.  Because of currents, especially after two hundred years, just because one item is found does not mean there will be more.

The father, Rick Schmitt, started the salvage company after retiring so that he could go treasure diving with his children.  Every summer, the three of them are out everyday on “Arrr Booty”, their boat, from 7:30am to 5pm diving for gold plying the waters of Treasure Coast.

However this time, they got lucky.  The son, Eric, picked the spot off the coast of Fort Pierce aka Treasure Coast where the family found four gold escudo coins, 8 gold chains and a ring worth more than $300,000.

Twenty percent of their find was donated to the state, and the rest was split between the family and their contractor.

Can you imagine a dollar bill lasting 200 years in the ocean?

References:  (the list is long today.  Usually I only show the refs I use and then can the rest but since I figured everyone loves a good lost treasure story, this is all the ones I looked at although only the top few made it into the story. Plus I’ll probably revisit one or two again and this is a handy dandy place to store them)

The Ragtag Daily Prompt now has it’s own blog site called the “Ragtag Community“.  Each day of the week a prompt is presented by a different person.  Today’s is “gold” by Curious Steph. Come and participate by posting writing or images evoked by the word and add your pingback or link to the comments there.  Hope to see you at Ragtag Community!

6 Legendary Lost Treasures That Are Still Up for Grabs
by Alex Sinclair Lack, Cracked, July 04, 2014

Legend Says There May Be Buried Treasure in This Central Minnesota Town
by Katie Kartak, 98.1 Minnesota’s New Country, November 10, 2015

The Legend of the Lost Gold of Keel Mountain
Gurley Lions Club, Alabama

More Arizona Treasures Waiting To Be Found
Legends of America

Hidden Treasure That Might Still Be Out There
Mike Rothschild, Ranker

The Top 5 Long-Lost US Treasures That Are Still Up For Grabs
Roadtrippers, August 30, 2016