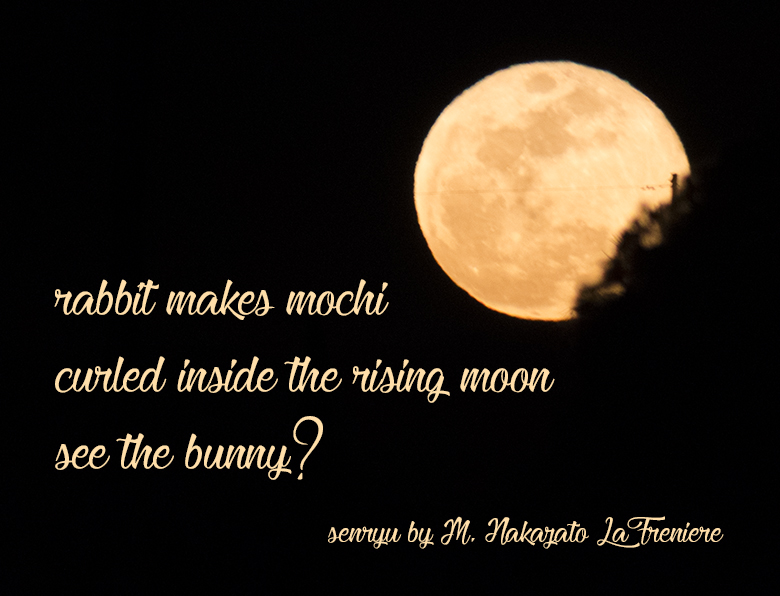 Japanese mythology has a rabbit on the moon making omochi (rice cakes).  To make mochi, you have to pound rice with a mallet into a doughy goo. In China, the rabbit is making the elixer of immortality.  Quetzalcoatl, in Aztec mythology, also elevated the rabbit to the moon.

In the stories, the rabbit and other animals meet up with a hungry old man, a homeless beggar.  The other animals gather food: fruit, fish, lizards, whatever to offer the beggar.  The rabbit can’t think of anything on grass which even it know is not suitable.  So unable to think of anything else, the rabbit flings itself on the fire figuring once roasted it would make a good meal for the beggar.  But instead of dying, the beggar reveals himself to be a god or a holy man and the rabbit is given immortality and a new home on the moon. The other animals (generally a fox or jackal and a monkey) want to go too but the god tells them that although they were good and kind and brought him healthy food, only the rabbit was willing to sacrifice his own life for another and this willingness to give up everything is what landed him on the moon.

The Apollo 11 kept an eye out for the bunny and his companion, a young woman banished to the  moon for stealing the elixir of immortality.

And for fun, for those who think the moon is made out of cheese:

Soundclip is from SciFri on SoundCloud

On the image:  Time & date (2018-01-31 18:39:14.029) I missed the blue moon which sucked since I had insomnia that night and I actually was up that morning when the moon set.  I took the following moonrise instead which was cool as it was large and orange.  I don’t know how to use my camera to make it do one stop up or down so i just kept turning the dial and shooting one pic each thingy.  So some of the pics, the moon came out blown out white discs and a few were this lovely orange.  When the moon first rose, the orange was a bit darker. My lens was 70-300mm.  If you look close, you will see a thin dark line across the middle.  That’s a telephone wire.  I thought about photoshopping it out but decided not to.  I shot it in raw, not jpg.  Then used Photoshop to change it to jpg. This pic is as is — no levels or blend modes or clean ups. For folks interested in the camera info, another frame is on flickr. You can click on “show exif” there.  I did a snapshot of that above. I darkened it a little in PS on the shot uploaded to flickr because I wanted to make it as close as possible to the color I saw.